We are a group of citizens who care about safe food and the technologies and inputs that are used in food production. Our board and officers are: Mary Lou McDonald, Jennifer Berman, Robert Adams and Ramsey Affifi.

The bio of Mary Lou is below. 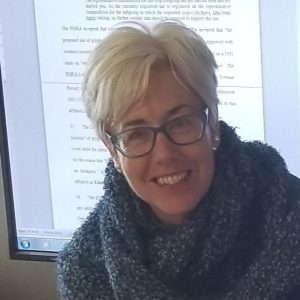 Mary Lou McDonald is a founding member and president of the Canadian safe food non-profit organization Safe Food Matters Inc. (SFM). Mary Lou is a lawyer and believes her contribution is through writing. She has authored various pieces for SFM and also No More GMOs Toronto, an organization focused on genetically engineered and synthetic biology foods.

As president of SFM, Mary Lou wrote and submitted SFM’s notice of objection (NoO) to the re-registration of glyphosate in Canada, and also the organization’s initial application for judicial review of Health Canada’s decision to reject the NoO.

Throughout her legal career, Mary Lou has also worked on persistent organic pollutants (POPs), in particular DecaBDE, a fire retardant that shows up in mother’s milk and infants.  Her petition to the Auditor General of Canada argued that the applicable regulations were flawed because they didn’t account for bioaccumulation through breathing air. She has been published in the Journal of Environmental Law and Practice on cumulative effects assessments in Alberta regulatory hearings. She has also served as a public interest participant to the Canadian Representation at the Basel, Rotterdam and Stockholm Conventions on POPs.

Most recently Mary Lou was a practising corporate lawyer. She worked for 10 years in private practice in Calgary in the natural resource sector, then moved to Toronto and worked primarily in the renewable energy field. She served as general counsel for three public companies that developed wind/solar/hydro/cogen projects across Canada.  Her undergraduate degree is from Ottawa’s Carleton University in political science (Honours), and her law degree is from the University of Calgary.

Mary Lou recently retired from corporate law and is now working on safe food matters. She enjoys spending time at “the lake” with family and friends, practices yoga and meditation, and is committed to the high road and staying positive.